New Delhi (UPSC Mains Result, Viral Tweet), Every year lakhs of candidates give UPSC exam. Many of them fulfill their dream of becoming an IAS officer, IPS officer, while many double their preparation while waiting for next year’s exam. But some of these candidates are also such, for whom this is the last attempt. In such a situation, it is natural for them to get upset.

Due to the facilities available in government jobs, even today they remain the first choice of most of the youth (Sarkari Naukri Benefits). But it is not easy to pass the competitive exams for government jobs. After the release of the result of UPSC Mains 2022 exam, many candidates have shared their experience on Twitter (UPSC Result). One of these tweets by a user named Ganesh Babu S is going viral.

Ganesh Babu’s UPSC journey ends
#UPSC is trending on Twitter since the release of UPSC Mains result. Some candidates are expressing the happiness of passing, while there are others who are congratulating others by hiding the sorrow of failure. The tweet of a user named Ganesh Babu is going viral on social media (Viral Tweet). He has also failed in his last attempt of UPSC Exam.

lesson learned instead of destination
Ganesh Babu has written on Twitter (Ganesh Babu Viral Tweet) – UPSC Mains result has been released and I am out of the race. This was my last attempt, but I’m not surprised. All my efforts and many years are gone, but the lessons learned in this journey will always be remembered. End of this journey with many moments to cherish #UPSCMains2022 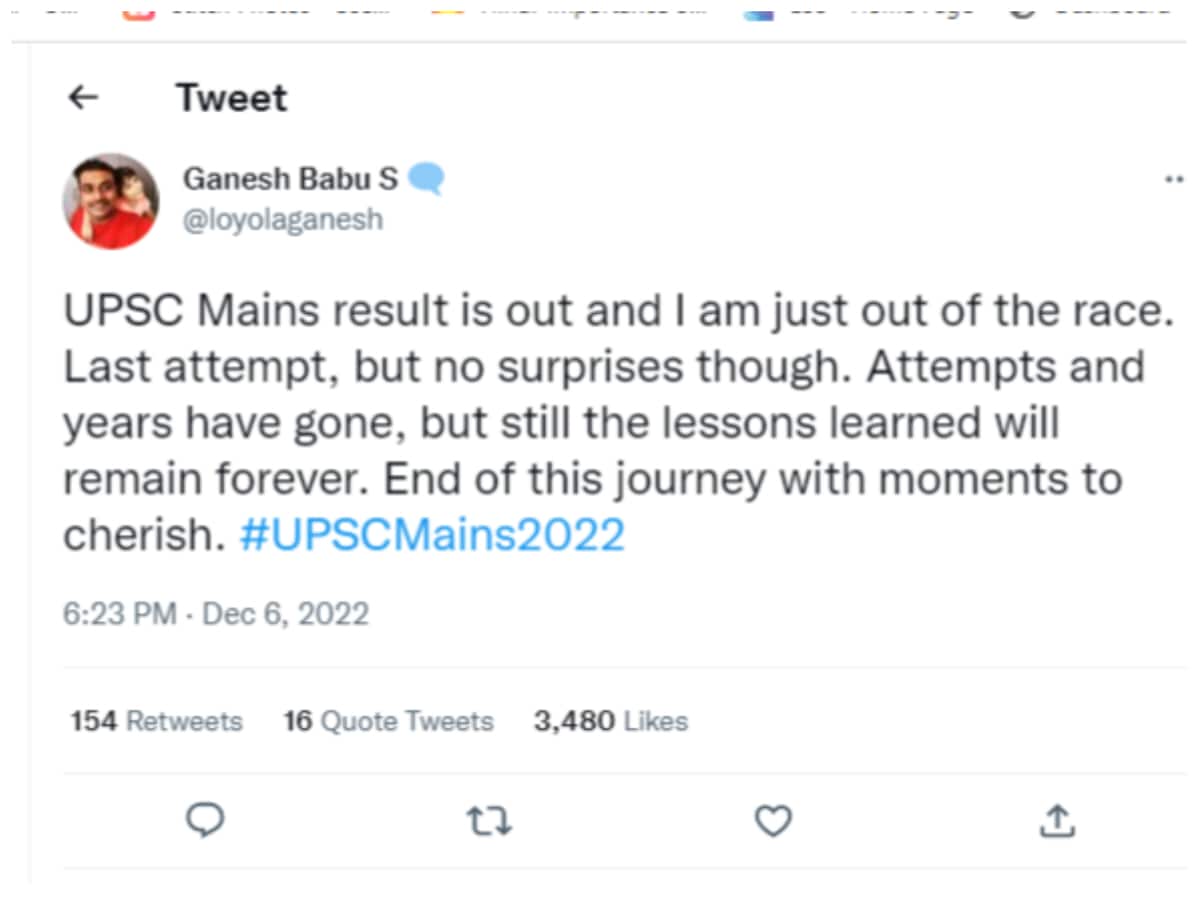 people made such comments
Different types of comments are coming on Ganesh Babu’s tweet. Some people are showing sympathy with him while some are talking about lack of hard work. Ganesh Babu has made it clear to the people that he has been doing government job for 10 years and is not disappointed after failing in UPSC exam. He has only expressed his feelings on Twitter.

read this also:
This is the factory of IAS-IPS, officers are prepared here, see pictures
Among the 7 sons-in-law of Lalu Prasad Yadav, some are leaders and some are engineers, see the entire family