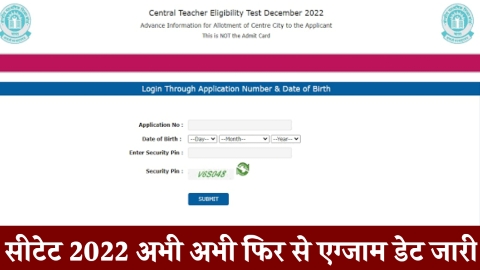 CTET 2022 Exam: CTET is organized by the Central Board of Secondary Education. Let us tell you that recently the admit cards for the CTET 2022 exam to be held in December have been issued. But there are many candidates whose admit cards have not been issued. That is, they do not know the exam date and city. Because his exam is going to be held in the second phase. Now a very good news has come for all of you youth. Please read full post in detail. If you want to know your exam date and exam city, then a big decision has been taken by CBSE for you.

CTET 2022 LATEST NEWS TODAY (In the last 5 years, more than one crore candidates have given the CTET exam)

You will be surprised to know for the first time that the number of 12th CTET exams have been conducted in the last 5 years. In this, a total of more than 1 crore candidates participated in the CTET exam, which is considered to be the largest ever. But the difficulty of the paper of the candidates can be fully estimated here. Every year lakhs of students appear in the CTET exam because they have failed in the previous CTET, they have less marks in the previous CTET.

● The paper was held in December 2018 in which 2000000 candidates appeared and the pass percentage was 18℅ percent.

The admit cards of CTET 2022 have been issued on 20 December. Let the candidates know that they have to keep checking daily by entering their registration and date of birth on the official website of CTET. Because CBSE can update its admit card anytime. In such a situation, you must check once daily. As of now, none of their admit cards have been issued. But pre admit cards can be reissued anytime. After the admit card, your main admit card will come through which you will be able to give the exam.

How many candidates have registered in CTET 2022 exam?