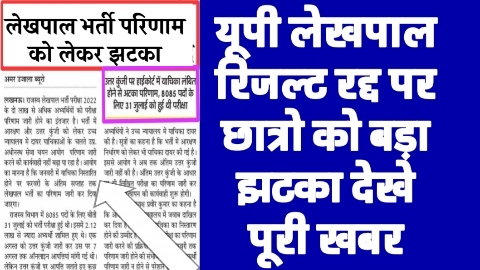 More than two lakh candidates of Uttar Pradesh Revenue Accountant Recruitment 2022 are eagerly waiting for the result to be released. Due to the petitions filed in the High Court regarding reservation and answer key in this recruitment, the Uttar Pradesh Subordinate Services Selection Commission is delaying the release of the result. The commission here believes that the petition will be disposed of in January and the result will be issued by the last week of February. Tell that the candidates are also speculating on the result of Lekhpal recruitment, whether the exam can be cancelled! Anything can happen in the future! Can’t say now. Because there was a lot of rigging in this recruitment. ,(UP LEKHPAL RESULT KAB AYEGA)

What is the latest update regarding UP Lekhpal Recruitment Result-

This exam was held on July 31 for 8085 posts in the Revenue Department. Now 212000 candidates had appeared in it. Now till August 7, online objections were also taken. Objecting to the answer key, some candidates had filed a petition in the High Court. Sources say that a petition has also been filed here regarding the determination of reservation in recruitment. And due to the filing of the petition in the court, the commission is delaying the release of the result. Due to this, the answer key is now in the commission, it has not been released. Now the result of the written examination will be released on the basis of the final answer key only. Because now the work of Objection is going on. And there the chairman of the commission says that the commission has filed a reply in the high court. The petition will be disposed of in January, after that the result will be issued, the candidates do not need to worry. (UP LEKHPAL RESULT 2022 TODAY NEWS)

Injustice is done to the students studying

The UP Lekhpal recruitment exam has been done, but the candidates who are about to study are being cheated here. Because in all the colleges where there are exam centers, solver gangs are caught. But still many people succeed in copying. The case of only those people whom STF is able to catch gets exposed. People whose STF is unable to catch and whose case remains suppressed. In such a situation, youths are not getting jobs even after being educated in Uttar Pradesh. (UP LEKHPAL RESULT UPDATE)

Question- When will the result of UP Lekhpal recruitment be released?

Answer- The result of UP Lekhpal recruitment will be released in the month of January.

Question- What will be the cutoff for UP Lekhpal Recruitment?

Answer- The cutoff can be around 75 in Lekhpal recruitment.